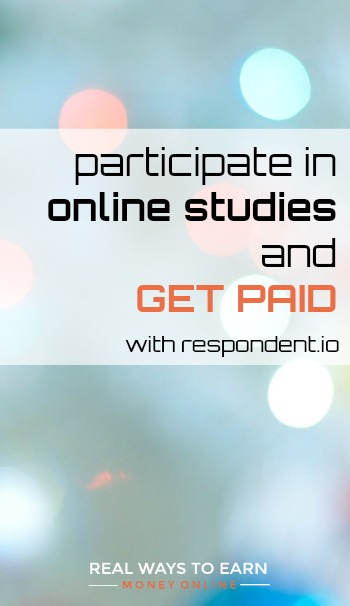 Are you looking for a way to get paid to do online (and some offline) studies? Respondent.io is a research firm who conduct surveys and studies for client companies.

The studies are pretty wide ranging, involving everything from focus groups, to usability testing, and video-conference interviews.

As a participant, you're paid very well for your time, and the company is always actively recruiting new people to join their study pool. Below, we have some more info on how it all works.

How Do Respondent.io Studies Work?

When you first sign up, you'll have to fill out some information about your background and provide Respondent.io with detailed demographics data. They will use that information to match you with companies conducting studies targeted at people like you.

When you log in, you can see a list of studies you qualify for and apply to those that seem most interesting or lucrative. The application involves filling out a screening survey. If selected, you get to choose a time for participating that's convenient for you.

According to users, the studies are quite varied in terms of what you'll be expected to do. Sometimes it's as simple as answering a few survey questions or following a set of instructions while using a computer or phone application.

Other times, you may have to converse with someone for a few minutes, discussing some topic or other through a skype-like interface.

I even found one person on a web forum who actually had people visit his house in person to conduct an interview.

Most studies apparently take about 30 minutes to complete.

How Much Can You Earn On Respondent.io?

According to their website, Respondent.io pays about $140 bucks per hour, and because the average study takes about 30 minutes, the math really adds up pretty fast. But realistically, this is still just an extra cash opportunity because you're most definitely not going to be doing this non-stop for eight hours a day.

You won't qualify for every study they have available, so it's reasonable to expect you won't get a constant stream of opportunities.

There will likely be significant gaps where you don't get to participate in any studies at all, and this may be more of an issue for some than others, due to demographics.

However, some participants (but not most) are able to make several hundred dollars in just a few weeks, which is way more than usual for companies like this.

Related: Looking for another opportunity to share your opinion for extra cash? We recommend Opinion Outpost. They are legitimate and pay within minutes once you've reached the cash out threshold.

Payments are delivered through Paypal, and apparently it only takes a few days to receive the money although the time can vary slightly depending on the companies who sponsor the studies.

Respondent.io offers both international and US only studies, so your location doesn't matter. On the website it says they're particularly interested in industry professionals, parents, and students.

What Do People Say About Respondent.io?

I found out a lot about this company by reading comments from users on message boards all over the internet.

There are a lot of people talking about Respondent.io, and many of them seem to be thrilled. Almost everyone seems to agree that the pay is fantastic, and the studies are usually really easy.

I only found a few notable complaints. The worst complaint I found came from an individual who said he signed up for a study and discovered that the client-company wasn't really conducting research at all. Instead, they spent the entire video-conferencing session trying to sell him something.

He didn't bite, and in the end, they didn't pay him. When he complained to respondent.io, he was unable to get anything resolved.

This man's experience was obviously pretty rotten, but he seemed to be a rare exception to the rule.

The only recurring complaint I noticed came from people who said they rarely ever got selected to participate in studies, even though they applied often.

Apparently a lot of the client companies only choose a small number of participants for each study, so you might spend a lot of time filling out applications with little or nothing to show for it.

This could get pretty frustrating, but since the pay is so high, all you have to do is get lucky a few times a month, and you can still end up with a decent amount of cash.

If becoming a Respondent.io research participant seems like the sort of opportunity you'd like to jump on, go here to read more about them and create a profile. Remember that you'll probably have to fill out some fairly detailed forms with personal information, so it may take a little time to finish up.

Looking For Another Way to Get Paid For Your Opinion?

Opinion Outpost is another site that pays for your opinions, although not nearly as well as Respondent.io. They will send you market research surveys via email that pay enough to earn a few bucks here and there. But the good thing is that they pay very quickly — most of them time, you will get your pay within minutes after reaching the cash out thresholds ($5 for Amazon codes and $10 for Paypal).