Today, we are talking about an app that pays you called Influence. This app was created by a market research firm called Voxpopme. The app allows companies to gather user opinions through the use of video surveys.

Because everything is handled via video, companies are able to get more clarity from individual answers than they generally could through other, less personal, interview methods.

We frequently share extra cash opportunities like this in our work at home/extra cash email newsletter, but not as many smartphone apps. So if you like apps and you like earning extra money, Influence is definitely an app you will want to check out based on how easy it is to use.

How Does the Influence App Work?

Once you sign up, you’ll be presented with a list of available questions which will vary depending on individual demographics factors, including your age, location, and interests.

The questions are delivered as short videos, usually no more than a minute or so in length. Typically, these are relatively simple – a person asks a basic question and you provide a quick answer – but sometimes they can be somewhat more elaborate. For instance, you might have to watch an advertisement, and then provide a detailed opinion on it.

You’ll have to use your phone’s built in camera to record a video answer and then upload it to the company’s server. The transfer time will vary depending on your connection speed, but for some people it can be less than a minute.

Submitted answers must first be approved by the client before the money is added to your account. In order to qualify for a larger number of questions, you can do additional surveys that gather more of your personal information.

Who Can Sign Up to Use the Influence App?

From what I can determine, you need to be at least 16 years old, and must be a resident of the United States, United Kingdom, Australia, or New Zealand.

How Does the Influence App Pay – Points Or Cash?

The Influence app pays you with cash, delivered via Paypal. You have to earn at least 15 dollars before you’ll be eligible to request a payout.

How Much Can You Earn With the Influence App??

Some of the information I’ve found online concerning this topic is a little contradictory, but it appears that the average payment for a single question is only $1, while some questions might pay as little as 25-cents.

Apparently, many of the questions only take about 15-seconds to answer, so that could still add up to a decent amount. But you also have to factor in the time spent uploading videos, and finding questions you feel qualified to answer.

Bottom line: like almost all opinion based earning opportunities, this is only for extra cash. It would most likely be impossible to earn a large amount of money with this app.

How Can I Maximize Earnings With the Influence App?

One key is to make sure your videos are as high quality as possible. If you provide unclear answers, or if there are recording problems with your videos, some of them might be disqualified. It’s also important that you speak for at least the minimum required time – usually 15 seconds – and it’s probably better if you go a little longer than that.

Another way to increase earnings is to take demographics surveys whenever they’re offered, which will over time give you access to a larger pool of available questions.

Is The Influence App Legit?

Yes, it appears that the company is fully on the up and up. Everything I’ve found online suggests that it’s fairly easy to get paid, and I couldn’t find anyone complaining about getting ripped off.

The app is apparently simple to use, and it seems like most people who dedicate any real time to it eventually earn enough to cash out.

The video-based interface allows for a relatively quick and engaging process. It should be less boring and much more interactive than taking a text or phone survey.

The payments aren’t huge, but compared to many other small cash opportunities, they certainly aren’t terrible either.

If you have social anxiety, or just don’t like the idea of sending videos of yourself to strangers, you might find this app extremely uncomfortable to use.

Additionally, as with all opinion gathering services, there are naturally some privacy concerns…

Companies like Voxpopme are obviously very interested in collecting your data and using it for profit. It makes sense to be at least a little bit suspicious of that. If you aren’t reasonably comfortable with the idea of sharing your data on the internet, then survey apps are probably not a good fit for you, and it might be best to give this a pass.

User Opinions On the Influence App

The App has a rating of 4.4 on Google Play, and 4.6 on the Apple store. Most people have nothing but positive things to say about it. The vast majority of the negative scores I looked at were either complaints about technical issues, or frustration that there weren’t enough questions available most of the time.

If you’re looking for an extra cash opportunity and would like to give Influence a try, you can sign up here.

Good luck to you! 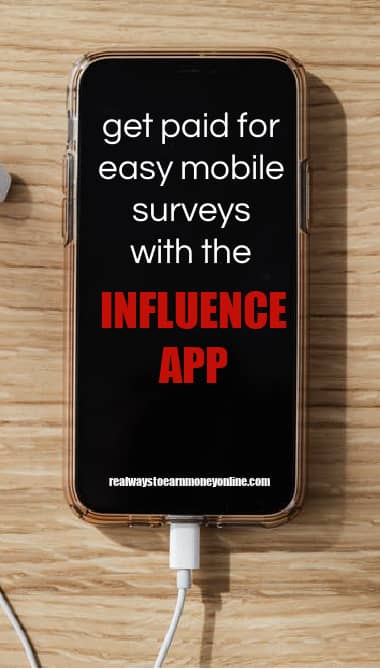