BuyBackWorld is a popular website with a pretty clever business model. They buy all sorts of used electronics, then turn around and resell them at discounted prices.

This is not a new idea, and there are quite a few other sites that work the same way, but BuyBackWorld have earned a pretty strong reputation in their niche, partly due to their streamlined, low-stress selling procedures. 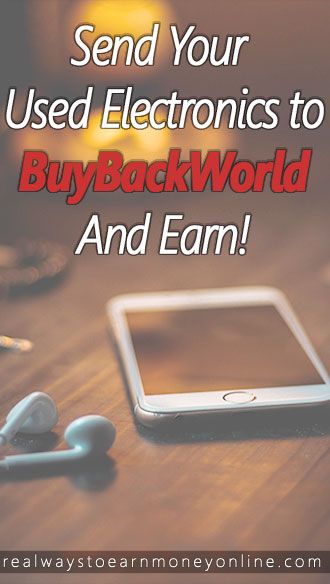 BuyBackWorld Review – How it Works

Selling your used electronics to BuyBackWorld is extremely simple. First, just go to their site and use the search function to find out how much your product is worth.

They have a huge database with 30,000+ items, so it's easy to find just about anything you can imagine.

At the top of each item page, there's a set of check-boxes for describing the condition of your product, with prominently displayed price quotes for each, going from highest to lowest.

Select the box that best fits your device, then choose a preferred payment method, and either request a free shipping kit or print out a shipping label.

After that, all you have to do is take the item to your local post office and send it away.

They'll check the product to make sure it matches the condition you described. If it does, they'll pay you the quoted price.

If they disagree, they might offer a lower price. At that point, you can either accept the new offer, or reject it and have them send the item back at no additional cost.

What Can You Sell?

BuyBackWorld is interested in purchasing all kinds of used electronics products, including cell phones, computers, cameras, watches, and gaming consoles.

Phones are a major focus, partly because consumers upgrade them so often. It's not uncommon at all for people to buy the latest model Samsung or iPhone, and immediately abandon their old model even though it still works just fine.

BuyBackWorld are perfectly happy to take those phones off your hands, and resell them to people who are less interested in staying on the bleeding edge of tech advancement.

In addition to electronics, BuyBackWorld will also purchase gift cards. If you're one of those people who spends a lot of time earning extra money on rewards sites, you've probably accumulated your fair share of gift cards for retailers like Amazon and Walmart.

BuyBackWorld makes it easy to turn those cards into cash money that you can use anywhere.

Let's get one thing straight – unless you have a ton of stuff to sell, you probably aren't going to rake in a huge amount of cash.

BuyBackWorld purchases items with the intention of reselling them later, so they're only willing to pay an amount that allows them to earn a decent profit. Consequently, you could probably make more money selling directly to consumers on a site like Ebay, but that would involve a lot of additional aggravation and uncertainty.

With BuyBackWorld, you'll be giving up some of your potential profit margin for the sake of convenience and simplicity, which might be well worth it for a lot of people.

Getting Paid With BuyBackWorld

Payments are generally sent within two business days after the item passes their inspection.

You can choose to receive your money in a variety of different ways. Paypal and direct bank deposit are the most popular options, but if those don't work for you, BuyBackWorld can also send a check by snail-mail, or transfer your cash to a gift card for store-credit.

The vast majority of the reviews seem to be quite positive, and the company has an overall score of 8.8/10, which is very good. Most reviewers really loved the convenience of BuyBackWorld's selling process, and used words like smooth and pleasant to describe their experience with the company.

There were, however, a handful recurring complaints, mostly related to delays. It seems that BuyBackWorld occasionally gets overloaded with items and aren't able to handle the inspection process in a timely manner.

Additionally, certain reviewers felt that the quoted prices were too low, and others said the company's inspection process was overly harsh.

It seems like the vast majority of consumers who bothered to comment had very good experiences with BuyBackWorld, but most of the complaints also sounded genuine to me.

Overall, it seems like BuyBackWorld is a very good service for the most part, but you might run into occasional problems, especially if you catch them during a particularly busy time of year, or send them one of your older, less desirable items.

If you have concerns, it might be better to try selling something small and inexpensive first, just to see how things go, before sending them a $500 phone or a popular game console.

To see how much money you could get for your used electronics from BuyBackWorld, visit the site and search for one of your older gadgets, and get an instant price quote.

Do you have any past experience with BuyBackWorld? Or do you use another similar service instead for selling your stuff? If so, give us a shout below in the comments section, and tell us what you think. We'd love to hear your opinion.