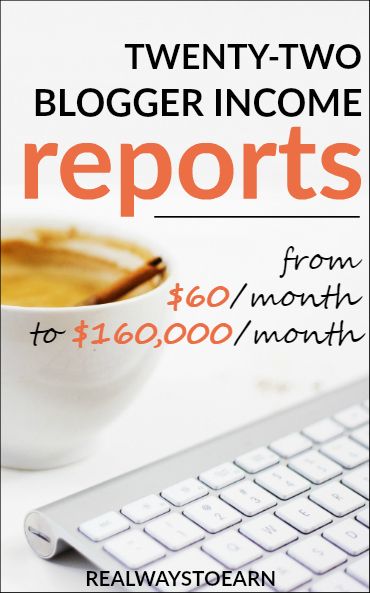 If you've been on Pinterest lately to look up ways to earn money online, you've probably stumbled across blogger income reports. I personally love reading these reports, and I always have, because they give me ideas for ways I could monetize my own blog.

One reason these reports are so popular is because not only do the bloggers tell you how much they made, they will often give specifics on where the money came from.

This can give you ideas on where to sign up and what to promote on your own blog.

And no, these people publishing their income reports don't necessarily have to be in your same niche. Many monetization methods can apply to blogs in all sorts of different categories.

So today, I've done some digging and found several different blogger income reports to link here. Also, I have put these in order by total, lowest to highest. I think this is helpful because I know some people need to process things in baby steps.

For example, if you're currently only making, say, $20 a month with your blog, you might prefer to start small and just read an income report from someone making $100 per month to see how they are managing that.

Keep in mind some of these reports may be around a year or more old, so the bloggers who published them are likely making more now than they were when the report was published.

#3 – Olyvia.co – $90 in November of 2014 – Erika's income in this report is mostly from affiliate links, with a little bit of income from ad networks.

#5 – Telecommuting Mommies – $275 in October 2015 – Alaina's income is mostly from affiliate links, with a small portion coming from ad networks.

#6 – Embracing Simple – $630 in August of 2015 – I have Christina at Embracing Simple linked above as well with an older report when she wasn't making as much. It's inspiring and motivating to see how quickly someone can way more than double their blogging income when they try. It looks like most of this money came from affiliate links.

#7 – Mostly Morgan – $700 in February of 2015 – Much of Morgan's blogging income is from sponsored posts, with some affiliate earnings and ad network earnings sprinkled in.

#8 – Arts and Classy – $779 in February of 2015 – Meredith earns her blogging income from a good mix of sponsored posts, ad networks, and affiliate links.

#9 – Well Kept Wallet – $1534 in April of 2016 – Deacon's income is from a good mix of sources, including ad networks, native advertising, affiliate income, and he also includes freelance writing income in this report.

#10 – Gen Y Girl – $2416 in December of 2015 – Kayla earns most of her blogging income from sponsored posts, along with a tiny bit from affiliate links and ad networks.

#11 – Rose Atwater – $4257 in March of 2016 – Rose has a lot of different income sources (always a good idea!). About half of what she earns comes from ad networks, while the rest is a mix of affiliates and sponsored posts.

Much of this income is now coming from freelancing that she is doing (Pinterest management, image services, and an eCourse), which she considers to be tied to her blog.

#13 – L Bee and the Moneytree – $7400 in April of 2016 – Lauren earns much of her blogging income from affiliates and sponsored campaigns. She also includes her staff writing income in this total, which is almost $3,000.

#14 – The Busy Budgeter – $9,000 in January of 2016 – Rosemarie's income is pretty well split down the middle during January between ad networks and affiliates, with around $1,000 coming from sponsored posts.

#16 – The Busy Budgeter – $12,484 in March of 2016 – This is another income report from Rosemarie. Her income is mostly split down the middle between affiliates and ad networks, with some income from sponsored posts.

#17 – Just a Girl and Her Blog – $14,652 in October of 2015 – Abby shares detailed income reports every single month, and also includes her expenses before mentioning the total.

Her income is generated mostly through selling her own digital products, affiliate links, and ad networks. She has managed to substantially increase this total since that income report was published.

#18 – By Regina – $16,382 in January of 2015 – I think I read that Regina no longer publishes income reports, but older ones on her site are very detailed. She earns the bulk of her money from her own products (courses, eBooks, physical planners, live seminars) and some affiliate income.

Well over half of her income in April came from affiliates with the rest coming from ads, sponsorships, staff writing, and client work. The income is listed is before her expenses.

#21 – Smart Passive Income – $166,123 in April of 2016 – Pat Flynn is pretty much the king on online income reports and has some of the most impressive blogging income numbers you'll find on the web.

He lists in detail his income and expenses. The vast majority of that income is from his affiliate relationships. He also earns from niche sites, book sales, and other smaller sources.

What About My Income?

While I don't publish income reports, I do earn six figures a year from this blog. The year 2015 was my first six figure year, and I earned about $108,000 that year. It has continued to go up from there each year.

So it goes without saying, blogging earns me substantially more money than a job outside the home ever did. And I'm someone with no college degree or any special skills.

My income is split up pretty evenly as of now between ad networks and affiliates, with a little bit of direct advertising and eBook sales sprinkled in.

One thing I notice is that the people making the serious money on this list earn the bulk of it through affiliates, not necessarily ad networks. So that is something to think about.

While ad networks can be lucrative, there are downsides to them. They slow down your blog, you don't get to pick the ads that display, and they are kind of annoying/not pleasant to look at.

With affiliates, what you promote and how you promote it is up to you. No one knows your audience better than you do, so there is a lot of control there.

You aren't depending on someone clicking an ad that may or may not appeal to them in your sidebar. You already know that what you're promoting will appeal to them.

Still, there are benefits to ad networks. It's totally passive. You put the code in, set it, and forget it.

They will earn you money without you having to do another thing. With affiliate networks, you do have to be strategic and put thought into what you're promoting regularly.

Another thing you'll notice is that many of these bloggers are doing a great job of diversifying their income (not putting all their eggs into one basket).

This is very smart in blogging, and I can say from personal experience that the more I branched out with income streams, the more I earned overall. And it felt good to not be dependent on just one or two income sources.

Do you need some blogging guidance?

Here are some things you can do to get going now: