You are here: Home / Transcription / Work at Home Captioning Jobs at AI Media

Have you ever dreamed of doing something in television production? Are you tired of working just phone jobs? Are you an accurate typist? If so, keep reading about the exciting opportunity to become a freelance captioner at Ai-Media.

Ai-Media is a company that hires freelance captioners to work on the captioning for television, movies, YouTube videos, and other sources of production which need captioning.

Ai-Media provides the captioning platform and all of the tools, so you will not have to purchase your own captioning software.

Almost anyone who has cable has heard of closed captioning. It is the text at the bottom of the screen that appears when someone in the video or movie is talking.

With locations in the United States, the United Kingdom and Australia, Ai-Media operates with the belief that every piece of content should be accessible to everyone – one word at a time.

What Special Skills Do You Need to Become a Captioner at Ai-Media?

The main skill is to have a good command of the English language both formally and colloquially. Then you should be able to type the time length of the clip or screen, so that the piece flows smoothly from one screen to the next. If you like transcription, then this might be something else for you to try.

Outside of a good command of the English language, you will need a computer and Internet connection.

How Long Is Training For You to Become a Captioner at Ai-Media?

Training is usually only one day for about 4 to 6 hours. It is fast paced and there is a lot to learn. Training is unpaid, but most do find the work and the training interesting.

How Much Can You Make as a Captioner at Ai-Media?

Their website states that you can make $27 to $42 per video hour. Now, a video hour is not the same as an actual hour (60 minutes).

For every video hour you commit to, you will put in approximately a total of about three hours for the typing, editing, research, and replay.

The good news is that you can set your own hours and work around any other commitments or work-at-home jobs that you may have.

Does Ai-Media Hire Outside of the United States?

Yes, as well as the United States, Ai-Media employs people throughout the United Kingdom and Australia. As for hiring in other countries, they currently are not hiring outside of the three previously mentioned.

What Do Others Say About Ai-Media?

As always, read them for yourself and decide if this opportunity is for you.

Simply go to their website here to check their current openings.

Good luck to all who apply.

An Alternative To Captioning – Transcription

Want to be taught how to do general transcription? Then you might want to check out this reputable eCourse that teaches you exactly how to do the work (increasing your chances of getting hired by just about any company) and how to begin making money. The self-paced intro course lasts for seven days and is fre 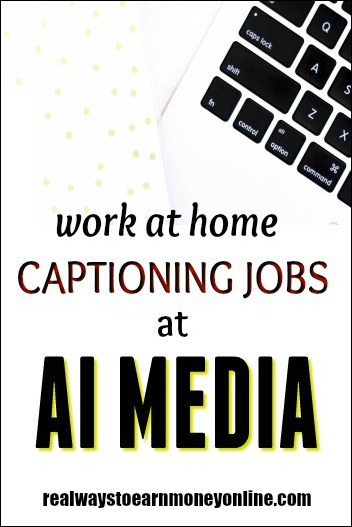 Leisa Good has worked in the corporate world as well as side hustled and operated a virtual assistant business full-time since 2006.. She wrote the eBook on that one! She is also a PFYP certified career coach and the owner of the blog, Powerfully Purposed For Success. She empowers folks 50-ish to find fun, flexible, and financially rewarding work both now and into retirement. However, this time it will be work/life on their terms.