You are here: Home / Extra Cash / A Hobby That Can Pay Off: Entering Sweepstakes Online
58shares 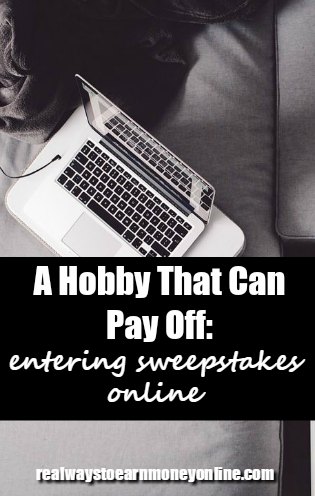 There are several ways to win money online in your spare time, as well as lots of other nifty prizes. If you believe that no one ever really wins sweepstakes online, you'd be wrong. There are plenty of people who put a lot of effort into entering sweepstakes online, and it does pay off.

The only problem is that you can't ever be sure you'll win, and for this reason it's very easy to get frustrated and just give up.

Entering Sweepstakes Online Can Pay Off

People who are entering sweepstakes online for prizes regularly have their own methods, but the general idea behind it is the more you enter, the more likely you are to win. If a sweepstakes offers daily entries, bookmark the page and enter every single day until it ends. When you want a prize that is given away weekly, make a point to enter each week.

There are also snail mail contests out there, and your odds on those might be better than you think because a lot of people don't want to go to the trouble of printing their info on cards and mailing things off. You can't enter if you don't win, and the more you enter, the higher your odds are.

There is a reason why some people do bother to devote a lot of time to this — it can seriously pay off.

Typing out all that info over and over can get really tedious, and for this reason many faithful sweepers use a program called Roboform. You've probably heard of it — it's basically just a form filler, but it's very valuable for sweepstakes online because of all the forms that need filling out.

With the click of a button, you can immediately fill the forms for probably 95 percent of the sweepstakes on the web. If it weren't for Roboform, I can honestly say that I wouldn't have stuck with entering sweepstakes for as long as I did.

There's a free version you can download, and if you really love it, you can pay to upgrade to Pro, but I found that the free version suited my needs perfectly.

Make a Separate Email Just For Your Sweepstakes Entries

Another tip to simplify things is getting your own email address just for sweepstakes. Set Roboform up with your new email, and be sure to check it every day so you don't miss any prize notifications.

You need a separate email because you will get a lot of spam, newsletters from companies, and so forth. It's not pleasant having all that stuff cluttering up your personal mail.

Two of the best sweepstakes sources you can use for entering sweepstakes online are Sweeps Advantage and Online Sweepstakes. These sites are both huge databases of just about every sweepstakes and contest that exists on the web. Both sites continually update their listings as well.

There are lots of other databases, but in my past searches for easy ways to win money and other prizes, I've found these two to be the best.

Online-Sweepstakes has a paid membership option (roughly $3.50/month) that gives you access to lots of other sweeps as well as ways to organize the sweeps you've entered in the past. They also have a feature for paid members that will open up several different pages of contests at once to cut down on page load times.

I paid for the premium membership for a long time and felt it was worth it, but a lot of people never bother with it and win just as much as people who pay.

There are huge giveaways and then there are smaller ones. You can enter for things as major as cars and thousands of dollars and things as minor as DVD's and books. I basically tried to enter for everything I absolutely wanted that I could find, no matter how big or small.

Your odds are often better on the smaller things, but that doesn't mean you can't win the big stuff. A personal tip from me is to seek out blog contests.

Giveaways on blogs frequently have no more than 300 entries. Your odds are great on these, and blog owners often give away really cool prizes.

If you're looking for ways to win money online rather than merchandise, you might not have much luck with blogs because money isn't usually offered. I also love instant wins because you don't have to wait to find out if you won, and they're usually attached to fun little games to play.

My Personal Experience With Sweepstakes

I entered sweepstakes off and on for about two years. The largest prize I ever got was around $500 worth of Xbox 360 games.

Unfortunately, I didn't have a 360 and the games were a second prize. The grand prize was the 360, and that's what I had been hoping for.

I still came out OK because I was able to sell the games on Amazon. In addition to that, I won a bunch of makeup from Estee Lauder, a fondue pot, $100 Foot Locker gift card, $50 Applebee's gift card, $50 Best Buy gift card, countless DVDs, several books.

If you want to see the full details, here's a list of what I got in 2007 and in 2008. I also recently got a $25 American Express gift card, but I'm honestly not doing this a lot right now because I don't have time.

If you want some real inspiration, check out this thread at Online-Sweepstakes of Hall of Famers who have seriously won big.

I guess the thing I despise the most is all the newsletters and junk mail you start getting. Even with a separate email set up, it's a pain. But when you enter sweeps, it's just inevitable that you're going to end up on a ton of mailing lists.

It takes lots and lots of patience, persistence, and optimism. Also, you have to keep in mind that you'll probably owe taxes on anything over $600, but if it's a prize you really want, you might not care.

Is it worth it?

It is! People's lives have been completely changed for the better by entering sweepstakes and contests. Entering is worthwhile if you really do want to win. I can't enter now as much as I used to, but it's something I know I would do more if I had time.