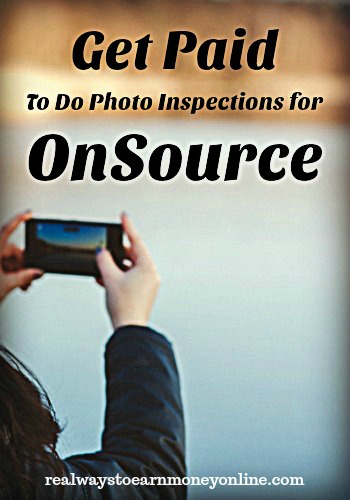 OnSource is an innovative company that specializes in performing on-demand photo and video inspections of property for insurance firms and other businesses.

OnSource hires remote workers who go from site to site, using the company's telephone app to take pictures of houses, cars, and locations. Their service is especially useful for companies with a need to visually inspect property in far-away locations.

From what I could find on the company website, the job sounds relatively simple.

When OnSource needs you to go out and perform an inspection, they'll let you know via an email or a phone call. You can schedule the inspection for a time that's convenient.

Then you drive to the location, take pictures or videos of the property in question, which will usually be a car, a house, or the site of an accident that led to someone filing an insurance claim.

Apparently different sorts of inspections might require very different photos or videos based on the client's needs, so you'll get a list of angles you need to capture, and according to some workers sometimes this can be tricky.

The whole process generally takes about 10 minutes or so. Once the inspection is complete, you upload the data to their website, using their phone app.

Inspectors are paid $18.00 per inspection, and $0.68 of mileage compensation for every mile of driving after the twentieth. You get paid, via direct bank deposit or check, and the first payment will go out 30 days after your first inspection.

You'll be able to pick a time of your choosing for each inspection, although presumably you'll have to go during daylight hours for most jobs, and you may have to account for the schedule of the property owner.

OnSource doesn't have particularly difficult requirements, but you will have to pass a background check.

If you already have an existing background check, you can send them a copy of it. Or you can pay $6.00 and use the Onfido service during your application process.

Related: 25 Ways to Make Money With Your Camera

Applying for an OnSource inspector's job appears to be relatively quick and painless. Just fill out a form on their page, upload a background check – or use Onfido to get one – then wait to see if you're chosen.

I used Glassdoor and Indeed.com to find worker opinions about this company.

Unfortunately there weren't that many reviews available on either site Among the few that I found, some were very good, others very bad. But most of the angrier reviews came from on-site employees rather than remote workers.

There were lots of furious one-star reviews from people who work in OnSource call centers, complaining about heavy-handed management, poor training, and the constant threat of being fired.

Conversely, most of the reviews from photo inspectors where actually quite good, but one individual had a nightmare story about driving thirty miles to do an inspection, and having some kind of error with the phone app.

When the person complained, he or she was told they'd have to wait more than 24 hours for a support professional to get in touch with them. Then they never got a call, and had some sort of altercation with a rude phone employee, who accused the person of being a liar.

So that doesn't sound so great, but other than this single nightmare scenario, everyone else seemed to love doing the photo inspections. The biggest complaint was a lack of work. It seems that if you live in a less populated area, you aren't likely to get many chances to take photos.

Also, no one said they were able to make a full time living doing inspections, so it might be best to view this as an occasional chance to make extra money instead of using it as a primary income source.

Overall the photo inspection job sounds pretty good, but there are so few reviews it's hard to say this with any certainty.

If you like the sound of everything above, and you want to give OnSource a try, go here, read everything over very carefully, and put in an application.

Want To Get Out of the House to Earn, But Don't Think This Opportunity Is Right For You?

Then you're in luck because I have some other options to suggest: