You are here: Home / Extra Cash / Paid Surveys / MindSwarms Pays You $50 For Participating in Video Surveys! 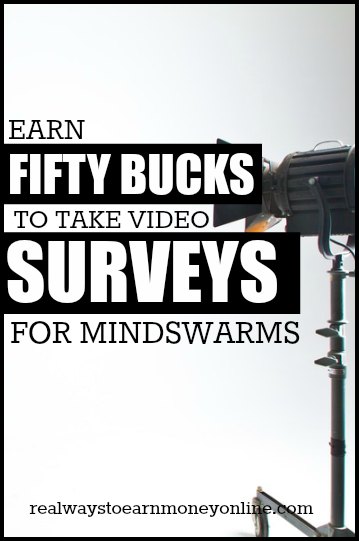 MindSwarms is a site I discovered that will pay you $50 per survey, which is a whole lot more than you normally get from most paid survey sites! But Mindswarms, as you might have guessed, does work a little differently.

With this site, you're answering the surveys via your webcam. It's actually like paid focus groups, only you're by yourself in your own environment.

Why does MindSwarms pay so much?

My guess is that it's because this is more like a focus group and not exactly a survey. Focus groups do, in general, pay pretty well if you're lucky enough to get picked for one. And earning $50 for participating in a focus group is not outside the norm.

Also, you're using a webcam to record your answers and putting yourself out there more than if you were just sitting at your computer, clicking radio buttons with “yes” or “no.” So what you're doing is worth more money.

Also, actually getting to see your expressions and gestures as you respond is valuable to researchers. They need to know they're getting honest answers, so seeing your face as you respond helps.

How quickly does MindSwarms pay?

Researchers are not supposed to judge you based on your content/answers.

You have to fill out some basic info, set up your camera, and record a sample video for them. MindSwarms doesn't pay you for the sample.

You can sign up from anywhere in the world.

How long does each survey take to do?

According to Mindswarms, most surveys do not take more than 20 minutes from start to finish.

How do you get the survey invitations from MindSwarms?

They come to you via email. Also, log into your dashboard occasionally to see if surveys are there, waiting for you. The surveys fill up quickly, so it's smart to grab them before they're gone.

Does MindSwarms have screener questions?

Yes, just like with most survey sites, there are screener questions to answer. These are to make sure you're actually a good fit for the survey.

According to MindSwarms, there are usually no more than five of these and they will determine whether or not you're actually accepted for a survey. You are not paid for answers to the screener questions.

Update: Just thought I'd mention that since initially writing this post, I have had one person message me via Twitter to let me know she was accepted into a study and made her $50 via Mindswarms!