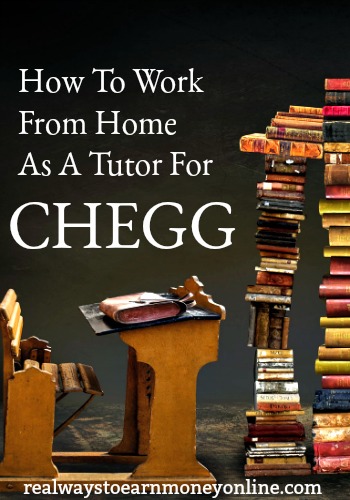 Chegg is a company know primarily for their thriving textbook retail business. In the last few years, they've created an efficient platform for online tutoring.

The tutors are home-based workers, and all student-teacher interactions are handled through an online interface. The company hires tutors for all grade levels, from elementary school through college and post-grad.

Once you're accepted as a tutor, you'll log into their online hub, and be able to see tutoring requests from students who're looking for help in the subjects you specialize in.

The site has a very slick set of online tools for use during the actual tutoring sessions. These include a video chat tool, a virtual whiteboard, and an editable text window. You and the student are both able to see all the tools, and interact with them in real time.

So for example, you could add a math problem to the whiteboard, and watch as the student worked through it, all the while offering advice and guidance via the video chat box.

Chegg pays 20+ dollars an hour, in theory, but there's a catch – tutoring requests are broadcast to all qualified workers in the system, and the work distribution is based strictly on a first come first serve model.

Since there are (reportedly) way more tutors than students, it can take a while to log a significant number of hours. To get the big money, tutors need to build up a reliable pool of repeat customers.

So if you do a good job, and have enough people skills to make a positive impression on first-time students, you'll make a lot more money in the long run. Expect a slow build.

You can log in and accept requests whenever you like, but to maximize your money, you'll need to be active when students are making requests.

There may well be a fair number of folks cramming for tests who need tutoring late at night, but I would bet that the peak times would be during the day and early evening.

You'll need to be an expert, with some level of college education. Students who are currently attending college are apparently welcome to apply. In certain cases you'll have to pass a test to prove your qualifications.

You'll need a computer and decent broadband internet access. The online tools don't appear to be particularly resource intensive, but you'd probably get some lag and RAM issues if you tried it with a very old system.

You sign up using either your email, or Facebook profile. Then you'll have to complete a fairly elaborate questionnaire, detailing your experience and qualifications.

Near the end of the process you may have to take a few tests to prove you know your stuff. Not all applicants are accepted, but based on reports, the company hires a fairly large number of tutors, so it may not be particularly tough to land a spot.

I used Glassdoor.com to find real accounts from tutors currently working for Chegg. The opinions I found there were generally positive, but there are definitely some issues that seem to cause a lot of frustration.

On the positive side, almost everyone loves the interface, which makes the tutoring process relatively seamless. There also weren't a significant number of complaints about the staff or oversight process, and most agree that the pay rate is pretty good.

So when it comes to the fundamentals, this site scores very well. Tutoring for Chegg seems to be a pretty nifty job for people who can get it. The site works well, and most tutors enjoy their work.

The biggest problems seem to arise due to the company's first-come-first-serve model. Most of the reviews I found mentioned that it can be tough to get hours, especially when you're first starting out.

Tutoring requests will appear on your screen fairly often, but when you try to claim them, the system will tell you that someone else already beat you to the punch. This reportedly happens all the time, so there's a lot of waiting around, and determining how much work you're going to get during a given session is pretty much random guesswork.

One reviewer mentioned that if a tutor had 20 hours a week to devote to the site, waiting for the occasional tutoring session, they could probably make about 100 dollars.

I don't know if this is typical – there's no way to be sure how competitive her particular subjects are – but it does point to an overall problem with the system. Apparently teachers outnumber students by a fairly wide margin.

From the company's perspective this makes perfect sense – they don't want to make customers wait a long time to get access to a tutor. But for workers it might be somewhat aggravating, especially those hoping to make this more than a part-time gig.

The people earning the most appear to be folks who've been working there for a while, and have managed to gradually build up a solid group of repeat students. So, if you're good at your job, and have a knack for connecting with people, you might be able to get a lot more out of Chegg over the long haul.

There's also a possibility that the customer-to-tutor ratio might change at some point in the future. Chegg could cut back on hiring, or they could manage to grow a bigger base of students.

If they ever get this single issue worked out, it looks like Chegg has the potential to be a really good work at home opportunity for those who enjoy teaching, so it might be a good idea to apply and get your foot in the door while they're still hiring a large number of tutors, even if you don't think it's likely to pay off in the short term.

If you're interested in getting a tutoring job with Chegg, go here and submit your application. Note: the vetting process appears to be pretty involved, so make sure you have plenty of time to spare before you begin.

P.S. – If you're looking for more sites to get paid for tutoring, we highly recommend VIPKid. They are currently hiring large numbers of ESL tutors for Chinese children. Pay is good — over $18 hourly in most cases. Learn more about it here.